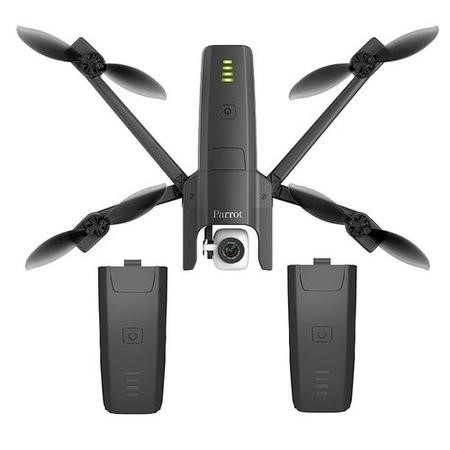 Parrot's Anafi 4K folding drone makes a great alternative to DJI's Mavic Air. It features a narrow, foldable design that weighs less than a pound and folds up small enough to fit in your backpack to use on-the-go. Despite its compact proportions, the drone comes loaded with some impressive technology that makes it incredibly easy to set up and fly. It boasts a 25 minute flight time and can reach speeds of up to 32 mph, which should give you plenty of time to capture all the imagery you need. The battery charges over USB-C which means you can potentially charge it in your car or using an external battery pack, which is a great touch! Plus, for added safety, the drone will automatically return to its take-off point and land itself if it detects the battery is low, so you don't have to keep a constant eye on the battery level when flying.

Tech wise, the drone features a built-in camera supported on a 3-axis gimbal with a 180 degree vertical tilt, which allows you to capture what's going on directly above or below and see things from a new perspective. It's a unique addition that we haven't seen utilised on a drone before but offers plenty of potential when filming. The high-end camera offers zoom capabilities and is capable of shooting 21mp images and 4K videos at up to 30fps. Plus, there's even the a built-in HDR mode that works in 4k to help bring out the hidden detail in murky scenes.

The drone offers a handful of fancy video modes via the Parrot mobile app to help you get your creative juices flowing, including a Hyperlapse and Slow Motion mode. There's even a dolly zoom feature, a technique used in cinematography, that allows you to keep your subject stationary while the background zooms in and out. As well as these, you can enjoy a host of automated flight and shooting modes to help you capture amazing aerial shots at the touch of a button, see below for the range on modes: