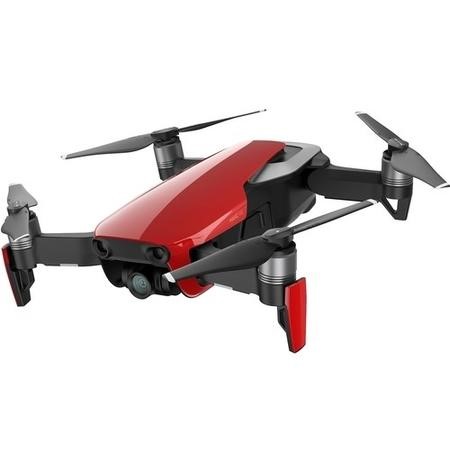 Just when you thought DJI couldn't outdo themselves with their ground-breaking Mavic Pro, they've only gone and done it with the Mavic Air. It takes everything you know and love about the 4K touting foldable Pro and makes it smaller, lighter and faster than ever before. It measures in at half the size of the Mavic Pro, weighs less than a pint and folds up small enough to fit in your jacket pocket, which makes it DJI’s most portable drone yet, even more so than the Spark. That goes for the included remote, too, which folds up small enough to fit in your other jacket pocket thanks to the removable sticks that store away inside the controller for added portability.

As for spec, the Air features a built-in camera supported on a newly designed 3-axis gimbal, which makes for stunningly stable 4K video and 12MP stills. There's even the option of a HDR mode to help bring out the detail in murky scenes, or take 32MP spherical panoramas of your local park at the touch of a button to playback later on a VR headset. It's also packed to the rafters with a range of sensors, including two on the front, two on the back and two underneath, to create a 3D map of its environment and automatically avoid crashing into obstacles! So, if you're flying straight toward something, the Air will know to go around it or fly over it without you having to do a thing.

If that wasn't enough, the drone also throws in gesture control just for good measure, so you can choose to operate it by moving your hands. Simply raise your arms, wave your hand, or make a frame with your fingers to manoeuvre and shoot photos. Plus, it comes with all the automated flight modes you'd expect from a DJI drone to help you capture amazing aerial shots at the touch of a button, including two new quickshot modes: Boomerang and Asteroid. Boomerang circles you in an oval-shaped flight path much like a boomerang, while Asteroid circles you and creates a spherical image of your surroundings that resembles an asteroid.

ActiveTrack - Automatically tracks and keeps you in frame no matter how fast you move
QuickShot - Choose from six pre-set flight modes to help shoot epic aerial videos with just a few taps (Rocket, Dronie, Circle, Helix, Asteroid and Boomerang)
TapFly - Tap your phone screen and it'll automatically fly in the direction of your tap
Smart Capture - Control the drone and shoot photos using hand gestures
Sport mode - Fly at incredible speeds of up to 42 mph
Return to home - It flies back to your preset home point while avoiding obstacles in its path

What's in the box?